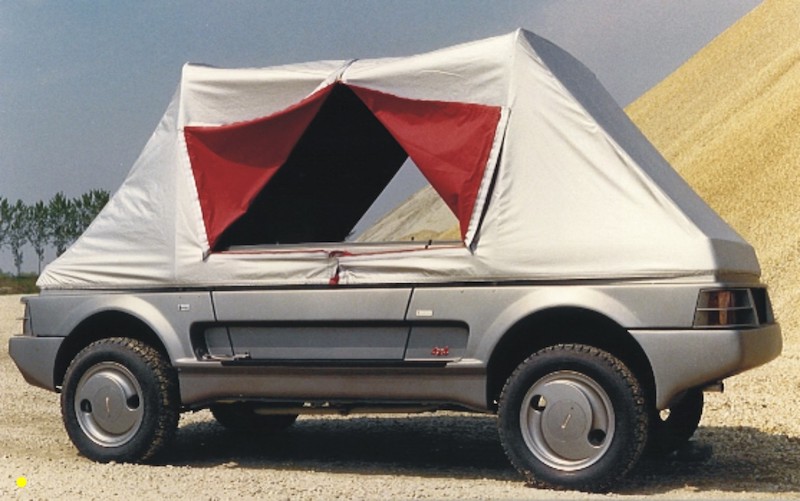 In this project carried out by Carrozzeria Savio, the underlying theme was the following: the study of a vehicle all-purpose multi-purpose vehicle with low production costs. The Fiat Panda was chosen as the basis, being a light and versatile vehicle. First, modularity developed, already graphically proposed twenty years earlier in 1967 with the famous "Ferrari MODULO", but now re-proposed in a concrete form. Various parts of the bodywork, such as the front, the rear, the doors, the sills, the wheel arches, the sides and the arches, excluding the lights, are perfectly equal to limit costs. The windshield and the steering wheel were foldable in order to obtain a single floor that could be walked on and used for various services, such as transporting long objects such as poles or stairs, passing under aircraft wings in smaller airports, temporary living in isolated places or even for an occasional campsite. For this reason, a symmetrical curtain was installed. A rigid hardtop was also available. Unfortunately, the vehicle was not understood by the press, undoubtedly impressed by the cover it considered to be fanciful, but in my opinion this shows little professionalism. Moreover, the Carrozzeria Savio was considered "minor" and therefore not worthy of interest by the so-called "expert" journalists. Now, after exactly twenty years, modularity is once again considered and perhaps some solutions could be rethought. Ideas have no age.