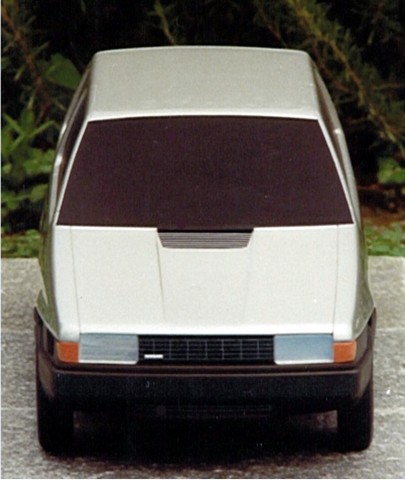 In the 80's the compact city car sector was in full swing and many car manufacturers faced each other with more or less successful models. There were the Opel Corsa, the Honda City, the old Renault Supercinque (soon replaced by the Clio), but the "Queen" of that segment and reference model was the Fiat Uno. With a wheelbase of 2400 mm and a total length of 3700 mm, the Nissan 1000 would have had to compare directly with the Fiat Uno (Pitch 2600 mm - Max Length 3640 mm). These were the typical measures of the 80s for the city compacts. The theme was quite challenging given that there was a prevailing economic discourse. In the drawings and in the final model on a scale of 1-5 it can be guessed that there was neither the possibility nor the will to execute extravagant, but rather thoughtful solutions, which however were sufficiently stimulating for an extremely heterogeneous public. This study was part of a stylistic research that the Japanese company proposed at the same time to several design offices to probe the futuristic market and had no plans for realization. A coupé version was also proposed on the same chassis as a complement to the project. Today, after twenty years, with new design methods and above all with the possibility of using materials that allow less rigid surfaces, you can work on stylistic solutions that were unthinkable at the time. Despite the fact that the Nissan 1000 did not have a productive follow-up, it still remains an example of research and as a testimony of what was the style and the techniques of realization and presentation of those years.