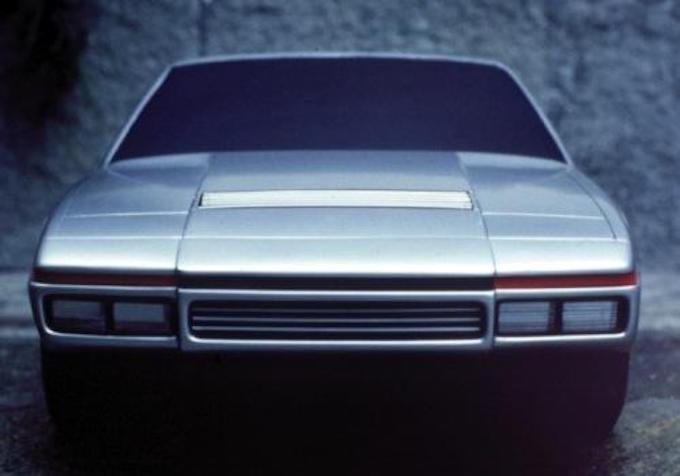 We are in 1979. A journalist friend asked me if I was able to satisfy a notoriously very pragmatic and demanding character with the utmost confidentiality and discretion. Intrigued, I accepted and one day I saw the owner of Lotus Cars Limited at the door, as well as the owner of the F1 racing team of the same name, Ing. Colin Chapman with his collaborators in tow. His request was to build a 2000 cc, 8-cylinder, four-seater and four-door sports car using the construction techniques typical of the then Lotus, that is, central supporting tubular truss with fiberglass superstructure. It had to be a car that would put Lotus in the high-performance luxury car segment and be practically the anti-Ferrari of the moment. Having had previous experience on this type of product I set to work, the only problem was to conceive the object constructed not in sheet metal, but in fiberglass, material with high and different thicknesses and therefore difficult to combine with profiles, extrusions and accessories. designed for these needs. I immediately noticed that Mr. Chapman was very demanding, but in the same way he left a relative freedom, so that the final result was as much as possible of international taste. At the beginning of 1980 I presented the first sketches with anterior and posterior perspectives in order to understand the orientation of both and reach the conclusion. Some views followed from the side until the solution was chosen. In the month of April I carried out the drawing on a ¼ scale and began the construction of the model in a relative scale with a rough background. Mr. Chapman personally corrected the model and wanted some minor modifications up to the defined model, presented with different solutions on the left and on the right. This study was presented at the Norwich site in June 1980. Unfortunately, fate did not agree and Mr. Chapman left us after a short time. The dream of both remained in the drawer and all ended with great regret, my and his entourage. This little secret guarded for 25 years can now be seen as a testimony of entrepreneurship and design at the end of the 70s, in which it is shown that simple and selective decisions could have had their weight in the evolution of the history of the car. I still have the satisfaction of having participated in and resolved such a daring project, even if it will remain forever in the drawer of dreams.